Everything has a story...

​﻿The Art of Sonja Griffin Evans
"Capturing the beauty, spirituality and purest representations of the Gullah Sea Islands and of African American culture." 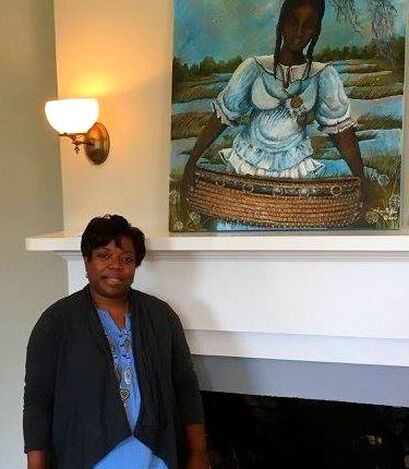 Sonja Griffin Evans is an international  Cultural Heritage Artist born and raised in Beaufort, South Carolina. Growing up in the Lowcountry, which prides itself on its ability to preserve its culture and heritage, has heavily influenced Sonja's artwork, and gives her an uncanny ability to capture the beauty, spirituality and purest representations of the Gullah Sea Island and of African American culture.  As a prolific mix media artist, she incorporates items such as tin, wood and other found materials in her art. She is also adept at painting the vibrantly colored art on canvas that is acknowledged as the traditional Gullah style;  by applying texture to her canvas and her masterful choice of color, she takes her art a step further to convey more depth and feeling. In both mediums, Sonja is careful to express her culture in its purest form. She is a master storyteller, bringing to life, through art, important historical and cultural heritage events and destinations that evoke emotional responses to her artwork. Evans believes that everything that God has created is not only beautiful, but has a purpose and states nothing should be wasted. She further believes she merely holds the paint brush and God ultimately creates the art.

"My ancestors were not slaves. They were agricultural engineers, masterful craftsmen and more who were enslaved because of their intelligence."  - Sonja Griffin Evans

The American Gullah Traveling Exhibition' depicts the unsung pioneers of the Gullah Geechee Cultural Heritage Corridor and of America throuh art. In March of 2017,  Artist Sonja Griffin Evans launched her 'American Gullah' International tour from the McLeod Plantation in Charleston, South Carolina headed  for a three city tour in France. Since then, the highly sought after American Gullah Traveling Exhibit has been traveling from coast to coast telling the culture and heritage of the Gullah Geechee people. Learn More..