google-site-verification=3GnN3iwcMSUy0LvrVBnuMa7coEEWz0rSWiNA4oogKwg
sonja griffin evans
Furthermore, it expressed her overall commitment to the house. It also represented the determination of who ran the household. Whoever jumped highest over the broom was the decision maker of the household (usually the man). The jumping of the broom does not add up to taking a "leap of faith." The ceremonial jumping of the broom served as an open declaration of settling down in a marriage relationship. ​Slave-owners were faced with a dilemma regarding committed relationships between slaves. While some family stability might be desirable as helping to keep slaves tractable and pacified, anything approaching a legal marriage was not. Marriage gave a couple rights over each other which conflicted with the slave-owners’ claims. Most marriages between enslaved blacks were not legally recognized during American slavery, as in law marriage was held to be a civil contract, and civil contracts required the consent of free persons. In the absence of any legal recognition, the slave community developed its own methods of distinguishing between committed and casual unions. Jumping the broom was always done before witnesses as a public ceremonial announcement that a couple chose to become as close to married as was then allowed. Jumping the broom fell out of practice when blacks were free to marry legally. The practice did survive in some communities, however, and made a resurgence after the publication of Alex Haley's Roots. 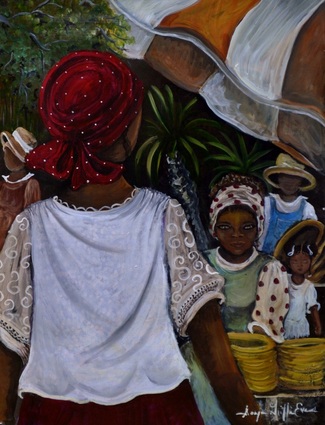 
Gullah is a culture and a language that derived from the many africans that were brought to the sea islands of South Carolina, Georgia and some parts of Florida. Because they were isolated on islands, they could maintain more of their african culture.

I am established, anointed, and sealed by God -2Corinthians 1:21 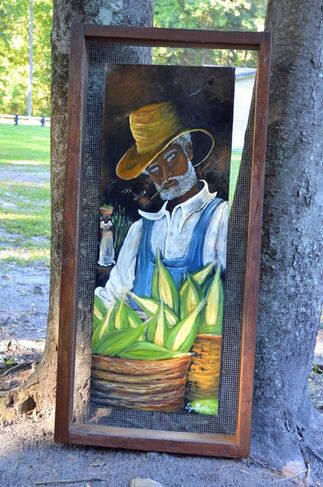 "Harvesting Corn"
Dimensions: 30in x 48in
Call for Pricing

My uncle took me to his old shed in Beaufort, SC and gave me an old corn sifter that was stored in the rafters. The old tin was cut and immediately I saw a man harvesting corn. I call him Mr. Zeke. I will attach him to the screen of the corn sifter and there he will be suspended in time. Forever reaping the fruits of his labor.

After the Civil War, former slaves sought jobs, and planters sought laborers. The absence of cash or an independent credit system led to the creation of sharecropping. Sharecropping is a system where the landlord/planter allows a tenant to use the land in exchange for a share of the crop. This encouraged tenants to work to produce the biggest harvest that they could, and ensured they would remain tied to the land and unlikely to leave for other opportunities. In the South, after the Civil War, many black families rented land from white owners and raised cash crops such as cotton, tobacco, and rice. In many cases, the landlords or nearby merchants would lease equipment to the renters, and offer seed, fertilizer, food, and other items on credit until the harvest season. At that time, the tenant and landlord or merchant would settle up, figuring out who owed whom and how much. High interest rates, unpredictable harvests, and unscrupulous landlords and merchants often kept tenant farm families severely indebted, requiring the debt to be carried over until the next year or the next. Laws favoring landowners made it difficult or even illegal for sharecroppers to sell their crops to others besides their landlord, or prevented sharecroppers from moving if they were indebted to their landlord.

"There is no such thing as part freedom." -Nelson Mandela 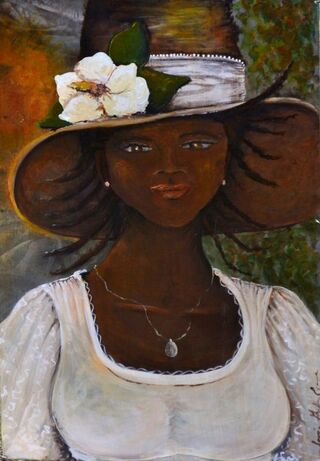 
When Magnolias bloom in South Carolina you know its summer. Magnolias are believed to have existed from the beginning of time. When examining it not only will you see it's beauty and smell its sweet aroma, but you will see a flora that is made to survive any climate.

I praise thee because I am fearfully and wonderfully made; Marvelous are thy works; and that my soul knoweth right well.  -Psalm 139:14 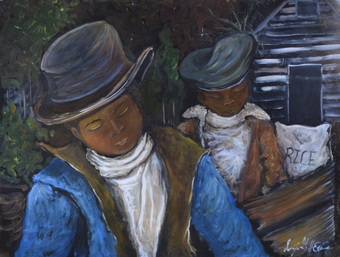 ​'My Brother'
Dimensions: 18in x 24in
SOLD
I looked at this piece of old tin and in it emerged two brothers. The oldest is pulling the youngest one in an old wagon. In the wagon is a sack of rice which was the number one cash crop in the Lowcountry. Rice is said to symbolize wealth and a link between Heaven (God) and Earth(Men).

Creating art from these old; sometimes discarded items, is a constant reminder of how we should see each other. Value each person and look pass the surface and the box we put them in. You may be amazed and pleasantly surprised by what you see.
-I will never leave thee, nor forsake thee. - Hebrews 13:5
Historic Mitchelville Series" 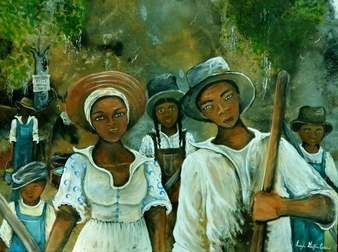 "Forty Acres and A Mule" (Historic Mitchelville Series)
(NOT AVAILABLE)

Laura Towne originally studied medicine when the American Civil War broke out. She was raised in Philadelphia hearing sermons about the abolition of slavery by her minister, William Henry Furness at the First Unitarian Church of Philadelphia. Influenced by these teachings, Towne answered the call for volunteers when the Union captured Port Royal and other Sea Islands area of South Carolina. With the help of her friend Ellen Murray they founded the Penn Center on St. Helena Island, the first school for newly freed slaves in the United States.

The school started with nine students and operated out of the back room of a plantation house. Towne and Murray spent the next forty years of her life ministering to the freed slaves, developing their trust, providing them with medical care, teaching them to read and write, and fighting for their land rights. Town and Murray eventually adopted several African American children and raised them as their own.

She took care of the school for the rest of her life and eventually gave up practicing medicine. After her death, Penn School was transferred to Hampton Institute, at which time it began operating as the Penn Normal, Industrial, and Agricultural School.

"For whom he did foreknow, he also did predestinate to be conformed to the image of his Son, that he might be the firstborn among many brethren. 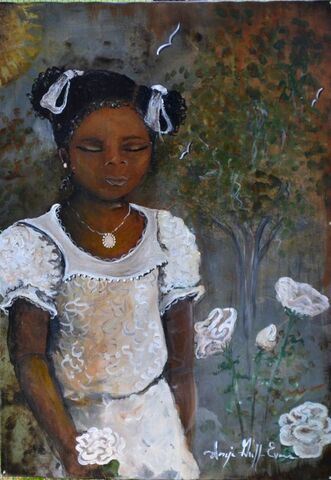 Precious is that inner child within us all who sometimes carry past hurts that have never been healed. But, there comes a time in our lives when we come to the understanding that all things were for a reason. We let go and come to a place of healing and inner peace. For only God can do that.

The Lord lift up his countenance upon thee, and give thee peace. -Numbers 6:26 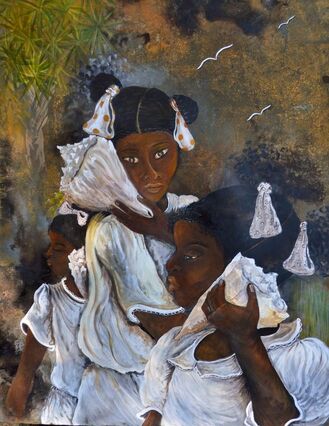 When I looked at this piece of tin I saw these little girls. After creating this piece, I remembered as a child listening to the sound of the ocean in a conch shell. I then read about the conch shell. Conch shells are known to have an array of spiritual qualities such as regeneration or rebirth. They were one of the items placed on the enslaved african graves. There is a gullah saying that explains how the sea brought the Africans to this world and how it would take them back to Africa in the afterlife. You see they may have been enslaved in this life but held on to the hope of being free in the afterlife. But these little girls are praying and believing they should experience freedom while they are yet still alive. So they're listening for a word from God.

Thy kingdom come, Thy will be done in earth, as it is in heaven. -Matthew 6:10 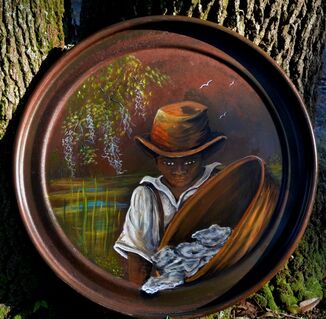 This little boy has learned how to live off the Sea Islands. Oysters, crabs, shrimp and fish are plentiful to make culturally inspired dishes such as She Crab Soup, Stewed Shrimp & Rice, Oyster and Rice and more.

In this piece the little boy is harvesting oysters. Oysters, much like this Pan African American Culture, have the ability to change foriegn irritants into precious perfectly round pearls, a culture that is to be treasured.

"But my God shall supply all your need according to his riches in glory by Christ Jesus." -Phillipians 4:19 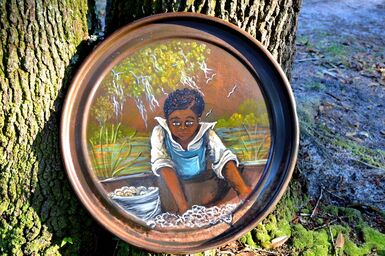 Dimensions: 24in round
SOLD

Indigo was the second cash crop for the lowcountry. Grown on lowland swamps, indigo proved a natural seasonal complement to rice; and large plantations intensively staffed with Negro slaves proved to be ideal for combing the two products. By the mid-1750s indigo production in the colony was in high gear and 500,000 pounds were being exported annually.

When painting these old pieces of tin, I was inspired to paint the people indigo blue. They were not only surrounded by indigo, but they were saturated with the spiritual understanding of the truth inwhich it represented.

Indigo has an effect on balance and coordination, self-reflection, mental clarity and wisdom. It has a balancing influence on our frustrations and fears.

The indigo color energy relates to our true understanding of life. When our indigo energy is balanced we are more able to understand the meaning of our lives and see the need to help others as part of our own spiritual growth.

"For I know the thoughts that I think toward you, saith the Lord, thoughts of peace, and not of evil, to give you an expected end.

Then shall ye call upon me, and ye shall go and pray unto me, and I will hearken unto you. 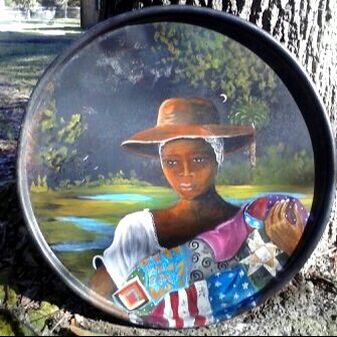 'Amazing Grace'
Dimensions: 24in Round
SOLD